The article reveals the essence, provision factors, and development stages of the spatial integration of regional economies on the basis of a critical analysis of the scientific literature. The author studies the features of integration/disintegration processes in the economic space of Russia’s European North in the post-Soviet period. The paper shows that cooperative relations of the region with other entities of the Russian Federation, which have been preserved since the USSR, can become an objective basis for the development of integration processes. However, they are constrained by a significant export orientation of the Northern region’s economy, negative demographic and migration processes that limit the integration development in the region’s labor market, and a decline in the level of spatial transport connectivity. The author substantiates conceptual areas, priorities, and tools for ensuring the spatial integration of the Northern region’s economy at the intra- and interregional levels.

The article explores the features of the spatial development of the European North of Russia in the post-Soviet period. It is shown that there are processes of polarization and disintegration of the region’s space, which is manifested primarily in the concentration of both the population and economic activity in the “nodal” points, which, as a rule, are large cities, administrative and industrial centers, as well as an increase in the area of the economic periphery. The prospects for the development of resettlement systems are substantiated, and an assessment of the connectivity of the northern territories based on an analysis of the level of development of their transport and logistics infrastructure is given. The necessity of forming several reference points in the economic space of the European North of Russia is substantiated, which, in our opinion, should become a kind of “counterbalance” to the large cities of the central regions of the country and will allow to overcome the negative trends associated with the compression of the region’s economic space. 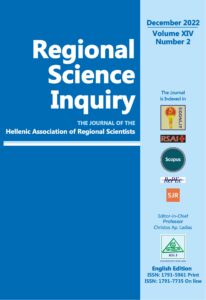