The main aim of this paper is to investigate macroeconomic effects of teleworking during the COVID-19 pandemic, using an atypical approach. We apply stochastic frontier analysis to a Cobb-Douglas production function broadened with teleworkability variable, and analyse the level of (in)efficiency of EU27 countries in producing their GDPs. We find that increasing the percentage of jobs that can be done at home by 1 percentage point reduces the level of technical inefficiency by 3.5%. Additionally, we use a unique e-survey conducted in April and May of 2020, which provides the data on the share of people who started working from home as a results of a COVID-19 situation, and combine it with the teleworkability variable. Overall, our findings suggest that more developed EU countries have a higher share of teleworkable jobs, which in turn reduces their inefficiencies, and furthermore results in more people beginning to work from home in the pandemic.

The paper analyses locations of headquarters of companies and their interactions by inhomogeneous point process, especially local scaling principles, because companies choose their locations according to the number of the local population. Relationships of the companies within economic sectors are studied using the analysis of locally scaled L function. The inhomogeneity was modelled using the local population, then the company’s size was included. Lastly the level of clustering in each sector was computed. The companies are located in three regions in the Czech Republic. It was found out that the companies tend to cluster when the population or the companies’ size is taken into account.

The agricultural realities across the several regions belonging to the European Union (EU) present some significant differences, in terms of the socioeconomics, cultural, structural and environmental dimensions. In general, because it is difficult to consider all the realities, within each country, sometimes the public decision makers, in Europe, need to design common approaches for all countries and regions, despite there being some decentralization of decisions. In this scenario, this study aims to identify and characterize the main agricultural systems in the European Union, using statistical information available in the FADN (2017), for the periods 2007-2009 and 2012-2013. This was done, considering the utilized agricultural area (farm dimension), the machinery (farm technology and innovation) and the farm net value added (farm competitiveness) as principal indicators. From these variables the European Union countries and regions were grouped into agricultural systems through cluster approaches and based on a farm dimension-competitiveness-technology index obtained with factor analysis. This approach was complemented by spatial analysis, through the observation of spatial autocorrelation between European Union countries, as determining the farming characteristics in neighboring countries. Of stressing, the relevant differences in the farm characteristics, not only, among European countries, but also, inside each member state between regions. On the other hand, of highlighting the adequacy of the index considered as representative of the farming particularities. 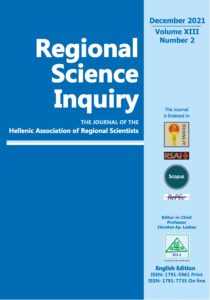