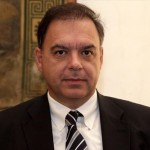 He has been a scholar of the Fulbright American Foundation, the Bafala Public Benefit Foundation, the Clark University and the European Commission. For five years he was coordinator at the State Budget Office. He is Director of the National School of Public Administration, Special Advisor to the City of Athens, Special Associate to the Ministry of Finance and External Partner of the European Commission.

He has taught at various Universities in Greece and abroad, such as at Clark, Bologna, Athens, Patras and Thessaly Universities. Currently he is Associate Professor at the University of Peloponnese, President of the Department of Economics and Director of the Postgraduate Program of Studies “Organization and Management of Public Services, Organizations and Enterprises”, which is conducted in collaboration with ADEDY and the Ministry of Economy and Finance.

He has authored and published over 10 books and more than 70 articles in scientific journals and publications, most of which are English. He has participated in presentations at more than 70 international conferences in Greece and abroad. He specializes in the field of economic analysis and policy as well as in the European and international economy.

Some of his most recent academic publications include the following:Kalatzis O., Tsiotis D. and Polizos S. (2016). The Contribution of Tourism in National Economies: Evidence of Greece. European Journal of Business and Social Sciences, 5 (5): 41-64.