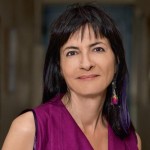 Professor Antigone Lyberaki is Professor of Economics at Panteion University in Athens. She was a Member of Parliament for ‘To Potami’, a party of the liberal centre in 2015. She has a PhD in Economics on Greek small and medium enterprises and an MPhil in Development Studies from IDS based at the University of Sussex. She has been a visiting professor in New York (CUNY) and Paris (EHESS). She was a Visiting Professor at the LSE and a Visiting Fellow at IDS at Sussex in 2016. Her research interests are SMEs, migration, ageing and gender. She has served as board member of ActionAid Hellas (2004–14), and Solidarity Now (2014–), an NGO active in refugee relief.

Some of her most recent academic publications include the following:

2015: (with P. Tinios), ‘A ‘Fairweather Welfare State’? Formal and informal social protection and the Greek crisis’. In:  R. Gerodimos and G. Karyotis (eds) The Politics of Extreme Austerity: Greece and the Eurozone crisis, Palgrave, pp. 106-122.

2013: (with P.Tinios, A. Mimis & Th. Georgiadis), ‘Mapping population ageing in Europe: How are similar needs in different countries met by different family structures?’, Journal of Maps, 9(1): 4-9.